Why Black Breastfeeding Week is Important

Like so many disparities that exist within our community, breastfeeding has long been an issue where a pretty significant gap exists. To put it plainly, 75% of white women have breastfed while only 58.9% of black women have breastfed. This disparity is important to note as it relates to many of the issues that black women and children face. From decreasing black infant mortality rates, preventing diseases that are prevalent in the black community, and overcoming cultural stigmas, increasing the black breastfeeding rate can have a significant impact on the health of our community.

In order to address the racial disparity that exists, it’s crucial to have black women represented in this conversation which is where Black Breastfeeding Week is extremely valuable. This time allows for black women to be highlighted in the breastfeeding space, to encourage other women and send the message that Black Moms Breastfeed Too.

Whether you’re a mother, a health worker, friend, or supporter there are many ways that you can get involved and help raise awareness for Black Breastfeeding Week. Join the conversation on social media, check out and SHARE the #blackbreastfeedingweek hashtag on Instagram & Twitter,  and learn more about this celebratory week on blackbreastfeedingweek.org. 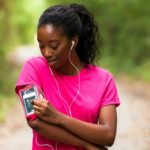 3 Tips to Get You Excited to Workout